anohana -The Flower We Saw That Day- When we were kids, we were always together.

I was a leader of the group. I was confident. I wasn't afraid of anything. Until that day that I said something to her — something I would regret for a long time.

I didn’t mean to hurt her. I just thought I would apologize the next day. But that “next day” never came. We all drifted apart, closing off our little wounded hearts.

Time passed, and one summer day a miracle happened. She appeared before me out of the blue.

“I have a wish that I want you to grant for me.”

However, she didn’t remember what her wish was. And so, to realize her “wish,” we will reunite once again at our secret base. 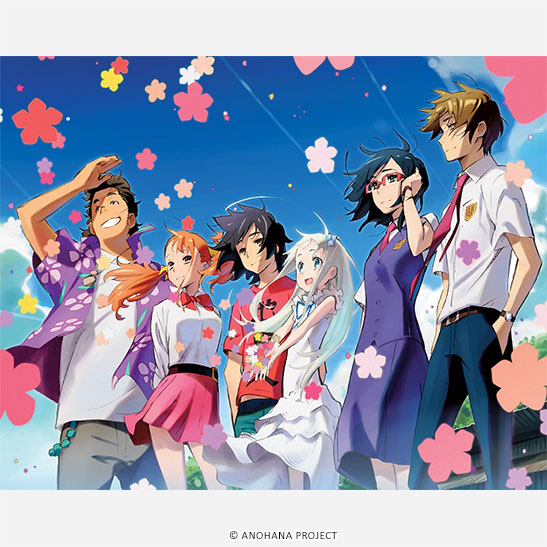 Jintan was a bold and energetic child, naturally assuming the leadership role within his group of friends, which he labeled the “Super Peace Busters.” After losing his loved ones, Jintan had become withdrawn, refusing to attend school and avoided the outside world as much as possible. When Menma first appears before him, he takes it as a manifestation of his internal stress and trauma.

Menma was a sweet and kind child; she cared for her friends more than anything at all times. When she reappears as a teenager, she still carries these qualities also resembling her child-like looks and behavior. She claims to have a wish she wants to be granted, but she does not remember what it is. Her efforts are mainly directed at getting the now-estranged group of friends back together again.

Anaru spent her childhood introverted and insecure. She was sensitive about her hair and glasses, and was jealous of Menma’s looks and easygoing personality, as well as her close relationship with Jintan. Anaru and Jintan would later attend the same high school, and when Jintan became withdrawn, she was the one to reluctantly look after him. Despite their strained relationship, Anaru continues to have feelings for Jintan, conflicting with her guilt over Menma’s death.

Yukiatsu was always somewhat cold and distant, traits that only grew more pronounced as he got older. Like Anaru, he was jealous of Jintan’s relationship with Menma, as well as Jintan’s assumed leadership role. Yukiatsu still struggles with Menma’s death, and his cool demeanor breaks down whenever someone mentions her name. He attends the same high school as Tsuruko. While the two are still extremely close, he is completely oblivious to her romantic feelings toward him.

Tsuruko was a quiet and observant child. She learned to watch others and foresee their unspoken feelings, that she tends to keep them to herself, along with her own feelings, to others. She harbors a deep affection for Yukiatsu, but knowing his attachment to Menma, she does not pursue him and remains as nothing more than a friend to him. Once the group reunites, she begins to open up and attempts to heal herself as well as the others.

The younger Poppo was always enthusiastic and idolized everything Jintan did. He was oblivious to the emotional turmoil in the group and focused only on having fun with the others. Eventually, he drops out of high school in favor of traveling the world. In between trips, he lives in the old secret base. He accepts Menma’s presence without question and devotes all of his energy in helping Jintan grant Menma’s wish.

Many of the characters’ nicknames come from combining parts of their first and last names (e.g. Naruko Anjo becomes Anaru).
In Poppo’s case, his first name Tetsudo means “Railroad,” and “Poppo” is the horn sound made by trains in Japanese.